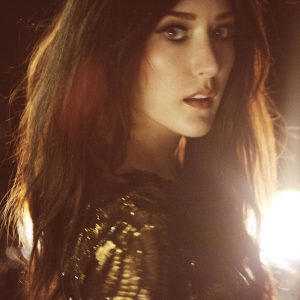 “I prefer to create friction,” post-country chanteuse Aubrie Sellers offers. “Because if you’re not pushing buttons, you’re just making something pleasant, it’s probably been done before… and it’s not making anyone feel anything.” In this world of pretty little girls who are seen and not heard and reality stars who are famous for nothing, the 24 year old songwriter ain’t buying in. Laughing, she continues, “I’d rather my music be polarizing than everyone like it, because they rarely do. I think passion is a lot deeper than that. I want to go deeper, and be honest that life isn’t just some party and going out. I mean, don’t people feel anything?”

Not that New City Blues, Sellers’ breakthrough debut album, is some kind of morbid, maudlin affair. From the cutlery in the blender indictment of surface beauty “Paper Doll” to the Lone Star drive of “Just To Be With You” and the tumbledown melody of “Sit Here and Cry,” this is a high energy box cutter of emotion: 14 songs marked by the bite and punch of smart girls who know there’s more to life than a cold beer and cut-offs. “I tell people there’s not a lot of happy songs,” the Texas/Nashville hybrid cautions. “But they’re not unhappy songs, either. It’s life… the way it is, and what’s wrong with that?”

Released to widespread critical acclaim, NPR Music calls New City Blues, “…plainly the work of an artist who’s determined to construct a riveting identity for herself,” while Rolling Stone declares it a “…gritty and glorious debut LP” and the Nashville Scenes asserts, “…a country coming-out party, complete with foot-stomping declarations of rebellion and a grand entrance from someone who’s already looming as an up-and-coming star.” Additionally, The Associated Press raves about her “garage country” sound, “a blend of fuzzed-out electric guitars, high-energy rock ‘n’ roll and Sellers’ country vocals and songwriting,” with The New York Times simply stating, “[Sellers] puts Southern-rock muscle behind her gentle voice.”

Raised on the road surrounded by award-winning singers, songwriters and musicians, Sellers spent most of her childhood drawing inspiration from her Grammy Award-winning mother Lee Ann Womack and her father hit songwriter and musician Jason Sellers. Her own credits include vocals on critically acclaimed country records including Ralph Stanley’s A Man of Constant Sorrow, David Nail’s I’m a Fire and Miranda Lambert’s Platinum. Of her duet with Nail on his song “Brand New Day, “ Esquire’s Andy Langer asserts that Sellers, “…establishes herself right here and now as one to watch.”