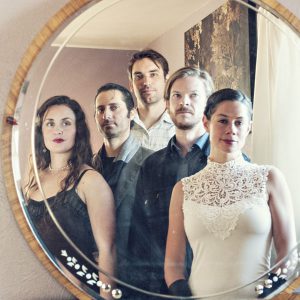 A haunting sound, at once evocative and mysterious, ushers in Petals, the latest album by Elephant Revival. Notes rise and suffuse the silence; are joined by a deep bass drone, a quiet pulse of cello and a percussive tick: daybreak made music.

That first sound on the lead track, “Hello You Who,” is a steel guitar, and its cinematic swell foreshadows the exploration of new territory by this beloved Rocky Mountain ensemble. A new band member and the introduction of instruments like the pedal steel and the cello into their already impressive treasure trove of strings and percussion are just the beginning.Petals embodies a deepening, as the quintet dives into themes of loss and rebirth, time and memory, love unbound by body or farewell. “Hello you who moves with me in a dance/Hello you who moves me like the sea/…Who loves me Love loves me just to be.” This hello is both a celebration of unconditional love and an invitation to join Elephant Revival in its wayfaring.

The death of a close friend having left its indelible mark on the band, many of the songs on Petals represent what guitarist Daniel Rodriguez calls “an honoring and a coping.” But this is not an album about despair or darkness; it’s a thanksgiving and a prayer for what endures and returns. “She thanks the sky, and she walks the earth/…To the broken-hearted, to the burdened, too/To everyone, peace tonight” (“Peace Tonight”). This idea is embodied in the very name Elephant Revival: moved by the separation and subsequent death of three elephants at the Chicago zoo, bass and mandolin player Dango Rose was inspired to busk in front of what was once their enclosure. Not just a gesture, but a true endeavor to create meaning and grace from loss. Petals, the band’s fourth album, is, in fact, a revival.

As ever, Nature is both a real and metaphorical touchstone in Elephant Revival’s work, from the petals pressed into the book of memory in the title track (“These petals intended for giving release”), to the seasons spinning through death and rebirth in “Season Song.” There are intimations too, of the ominous vulnerability of Nature to our darker impulses. In “Raindrops,” Bonnie Paine sings, “Raindrops on the rooftops he said/Just stop and listen/Constant as the earthquakes.” She is both warning of the real effects of fracking and reminding us that a remedy may lie in deep listening—to each other and to the earth itself. The band’s commitment to community and the environment remains at the core of their music.

Elephant Revival’s music maintains its roots in American and Celtic songcraft, but on Petals, they achieve a compositional maturity that in moments can evoke the modern classical ensemble. Spare, almost conversational strings punctuate the rhythmic momentum in songs like the title track and the almost archetypically stark Celtic narrative, “Furthest Shore,” a continuation of the story told in the song “Currach” from their first 2008 self-titled release. The icy drama of the North Sea inhabits those percussive strings and resounding drums. This kind of intensity recurs in other songs, like “When I Fall,” a Dango Rose-penned shout-out for transcendence through trial, whose unison power chorus brings to mind Pink Floyd’s The Wall.

Passion arises from compassion on this album; tenderness and wildness go hand in hand. Dan Rodriguez’ voice on wholehearted folk songs like “On and On” and “Home In Your Heart” is a gentle counterpoint to Paine’s vocal intensity, and the songwriting overall describes a wide arc. Just follow Bridget Law’s expressive fiddle through the course of the album to hear the moan of the blues, the lyricism of the folk ballad, the elegant bones of the chamber piece, the bluegrass punch. All the earthy rhythms, eclectic influences and the rich instrumental brew that Elephant Revival fans cherish are here. But eclecticism, though a key feature of their sound, has never been the point.

For these multi-instrumentalists, these singers and writers, sound and song serve one another: the play between instrumentation, composition, emotion and restraint is an organic unfolding. Paine, for example, has never recorded or performed on the cello before this album, but she’s written songs on it for years, so if her throaty cello somehow sounds like a deep extension of her voice, it is. And if new band member Charlie Rose’s magnetic pedal steel conjures ghosts—of love, of landscapes—it’s because Petals is haunted by those things.

Elephant Revival’s is the music of connection—kin-folk—and the message ofPetals, their most intimate album to date, is not how life is about loss, but rather how much life there is in loss, how much potency, how much love. The ghost of the beloved in the final track “Close As Can Be” is not, after all, far away. “…I feel you near/You’re lifting the leaves/Saying to me/We’ll be close as can be.” The hello of the first song has gone on a musical odyssey and found in the end, in goodbye, its mirror image: the promise once more of unending and unconditional love.