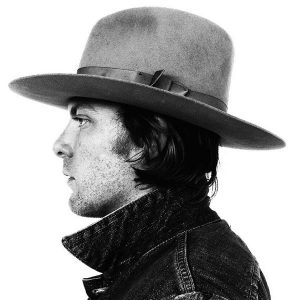 Singer-songwriter Frankie Lee releases his debut album American Dreamer on July 8, 2016 (Thirty Tigers/Loose). A Midwesterner by birth, Frankie Lee is a traveler by nature. His father was in the horse business, and the family moved around a lot — Michigan, Texas, Minnesota, Tennessee, among other places — which accounts for his sometimes vague answers to questions of where he “comes from.” Lee spent a couple years in college before dropping out to become a folksinger. (Lee often returned to Minnesota in subsequent years, spending entire summers, he said, working alone on a farm.)

He moved to Austin, TX, and got his first paying gigs on the folk/country scene. He played clubs like the Scoot Inn and the Longbranch where he met JT Van Zandt (who he later worked for) who introduced him around the up and coming East Austin scene. After almost seven years in Austin, it was off to Los Angeles. The first show he played in LA was with an up and coming band named Dawes. As time went by, it was obvious Lee didn’t belong in LA, but he stayed a few more years chasing the music and the women only to find he couldn’t keep up with either.

After 10 years away, he returned home with a bag of new songs and recorded them right away. Minneapolis was the right fit for the sound he had in his head at the time. A band was assembled through drummer JT Bates that included Jeremy Ylvisaker (Andrew Bird) and Mike Lewis (Bon Iver) amongst others. Most of the songs were cut live the first night and appeared as they were on Lee’s locally released EP Middle West.

It was Middle West that connected him to a wider world and American Dreamerthat brought him there. American Dreamer was recorded over a period of time he spent working on a pig farm and living in St. Paul, the songs were written in the early morning commutes from city to country. That’s where these songs sit best, opening up as you get further away: a vision from a man alone in time, capturing the sound where dreams and reality meet. The album was released in England in 2015 by London label Loose, who were the first label to sign the likes of Sturgill Simpson, The Felice Brothers, Hurray For The Riff Raff.

American Dreamer is “Nostalgia for the Future.”