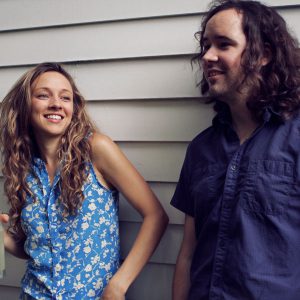 After the breakout critical success of Mandolin Orange’s 2013 Yep Roc debut, This Side of Jordan, you’d be forgiven for expecting the classic “road record.” Instead, the North Carolina duo of Andrew Marlin and Emily Frantz have crafted Such Jubilee, a gorgeous, deeply moving about album about home.

“When you’re gone so much, you start realizing what you have and what’s waiting for you,” explains Marlin. “You realize this there’s place to come back to at the end of the journey. The road has been good to Mandolin Orange since releasing This Side of Jordan. NPR called the album “effortless and beautiful,” naming it one of the year’s best folk/Americana releases, while Magnet dubbed it “magnificent.” It earned them performances everywhere from the iconic Newport Folk Festival to Pickathon, as well as tours with Willie Watson, Gregory Alan Isakov, The Wood Brothers, and more.

For the Such Jubilee sessions, Marlin and Frantz set up facing each other in Asheville’s Echo Mountain studio to capture the undeniable chemistry of their live performances. On “Settled Down,” Marlin looks at what it takes to find that nearly-telepathic level of comfort in a relationship, while “Daylight” looks for peace in long-term companionship, and “That Wrecking Ball” meditates on the sometimes ravaging passage of time. Not all of the songs are purely introspective, though, as “Jump Mountain Blues” brings to life a haunting Native American legend, and the ambitious “Blue Ruin” was penned in response to the horrific violence at Sandy Hook.

Such Jubilee is a record about home, both the place and the idea. Some days it’s a safe, warm, loving refuge from the world outside. Other days it’s cold and empty and too quiet. Either way, it’s always waiting for you at the end of the road.