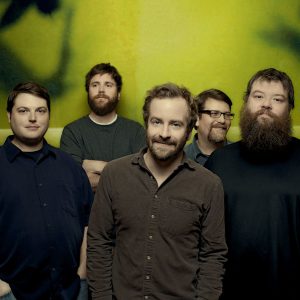 On Wild Animals, Trampled by Turtles’ seventh studio album, themes of impermanence run deep, both lyrically and sonically. The quintet’s hybrid folk sound continues its evolution pushing the band further into the grey area between genres that defies pigeonholing.

Trampled By Turtles formed in 2003 in Duluth, Minnesota. From their beginnings on the Midwestern festival circuit, they have reached new heights with each album. The release of 2012’s Stars And Satellites saw the band play to more fans than ever, sell close to 100,000 albums, make their first national television appearance on Late Show With David Letterman, and have their first concert feature, Live at First Avenue, broadcast on Palladia. This year will see the band headline Red Rocks Amphitheatre for the first time and the kickoff of their own festival, Festival Palomino, which will take place September 20, 2014 outside Minneapolis.

Lead songwriter Dave Simonett has been especially affected by change over the last few years. He relocated from Duluth to the city of Minneapolis. “When I lived in Duluth, I think I took connection with uncivilized nature for granted. There, I had to drive 20 minutes and I was in the middle of nowhere, and I did this almost daily,” says Simonett. “This was a very important ritual for me. Solitary time in a nearly untouched landscape is my version of church, so I think there is a bit of loss of religion in a lot of my work these days. I’ve always been a little obsessed with our struggle to stay connected to our simple animal side, the part of our nature that lived off the earth, hunted live game, worshipped trees and mountains. I believe a lot of sadness is caused by feeling disconnected with the rest of nature. A lot of what is instinctual for us is beaten down and frowned upon in modern society. It has to be confusing for the subconscious.”

Wild Animals found Trampled by Turtles working with a producer for the first time in four studio records. The band placed themselves in the capable hands of longtime Duluth, MN compatriot Alan Sparhawk of the band Low and engineer B.J. Burton (Poliça, Megafaun, Volcano Choir) who crafted a sonic landscape that was spatial and new at Cannon Falls, MN’s Pachyderm Studio (Nirvana, The Jayhawks). Says Simonett on working with Sparhawk: “Alan is one of the most musically courageous people I know and that’s exactly the attitude we were looking for. He’s great at taking a song from its false conclusion all the way down to its very core and then building it back in new and interesting ways.” And on Burton’s contributions: “He has an exciting way of looking at sound. He shares Alan’s courage in music in that he’s ready to take organic sounds and push them to new places. He’s extremely technically skilled but not tied to any recording dogma.”

The band’s signature harmonies are intact, although the contributions that Sparhawk and Burton added created a new depth. Tim Saxhaug, the band member who has traditionally done much of the vocal arrangement says, “The production team pushed the band to consider new ways of approaching harmony, and the result ‘opened our ears.’ I wasn’t sure that recording could feel new after six studio albums, but that went away on the first day. Making this album was the most creative I’ve ever felt in my life.”

When asked about themes in his writing, Simonett says, “I’ve always felt they’re just various ways humans have attempted to explain the unexplainable. To keep the fear of the darkness that waits for all of us at bay. The death of a loved one, the parting of friends, the changing leaves, the loss of love. All the little parts that come and go. In a way it’s refreshing because the knowledge that nothing will ever stay the same offers innumerable opportunities for rebirth. “

Sparhawk adds about the band’s relationship, “The sound that caught my ear was there from the beginning and stands to this day: I call it the ‘wall of strings.’ Taking instruments we have heard for generations, the Turtles dive in with post-punk energy and selflessness. Everyone has a part in the arrangement that leans on and enhances the others, always serving the song. The message is not about individuals – it’s about what can be done when people get together, apply their heart and soul, and make a little room for each other. Music has always had that potential, but it’s rare when it actually happens.”

Erik Berry says of the band’s chemistry, “From the earliest times we started playing, there has always been a real hard-to-define quality about our chemistry, something special. It’s been a treat to find that more than ten years in we still can turn new corners, at least new-to-us corners, together in the way we approach a song or a sound and still with that quality. That something that makes us, us.” Wild Animals is the sound of a band at the peak of their potential, strengthened from a decade together, winning some and losing some, but growing none-the-less. The album captures the intense nature that goes with being alive, melding the universal and the personal.